The FPD Treble Makers Orff Ensemble has been practicing hard for Grandparents Day!  It's just under two months away, and we are working diligently to prepare some difficult music.  Our biggest piece to date is called "Crunchy, Crunchy, Crunchy."  It's a 3-part piece in 3 different sections.  Today, we knocked out the 3 part of section A and put it all together.  They were rockin' the barred instruments this morning!  I'm so proud of this group! Have a listen! 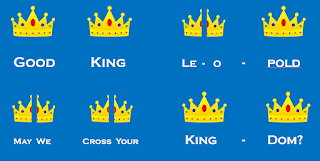 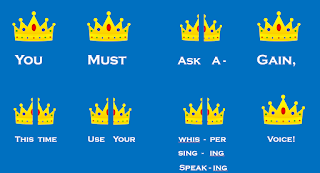 The pictures of the crowns show the students long and short sounds--the rhythm-- of the song.  This is a beginning step in reading musical notation for the kindergartners!

In Kindergarten music classes, we spend a lot of time exploring!  This singing game is a fun way to explore our voices and different ways to move.  This song is called "Good King Leopold."  Students learn to sing to the "king," and then the "king" gets to solo sing back to the whole group.  The "king" assigns a request to the students--they must ask their question in a singing voice, a speaking voice, or a whisper voice.  When the "king" grants their request, the students travel across the "kingdom," moving in a different way each time.  We used movement words like march, jump, tiptoe, and walk to travel with.  This singing game also allows me as the teacher to assess each child on their ability to solo sing and match pitch.  Pitch matching is a vital skill acquired in these younger years!  Below are a few pictures and videos of a kindergarten class in action early this month.

Christmas Music to Practice with at Home!

Believe it or not, we are one month out from the Elementary Christmas Program!  Here are some links to songs if you'd like to practice/listen at home! 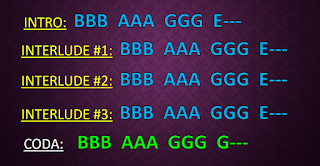 RECORDER PART FOR WE THREE KINGS

THE ANGELS SANG (NOTE: it's not the full song, but it's most of it!)

Creation and Composition were the theme in 4th grade last week!  We reviewed the song "Hot Cross Buns" on our recorders, as well as the 3 notes in the song.  Next, I showed the students the song with one measure missing.  Then, I told the students they were going to fill in that missing measure on their own!

Before diving in, I asked the students, "What was the first thing God did in the Bible?"  They thought for a few seconds before eagerly proclaiming, "He created everything!"  We talked for a few minutes about how we see God as the Creator in Genesis 1.  Later in the same chapter, He tells us that he created us to be like Him.  And, He even gave us the task to be creative!  (See Gen. 1:27-28.  In theology, this is known as the Creation Mandate.)

Then, I shared that a person who writes music is creating something new.  In musical terminology, people who create music are composers.  And, you don't have to be a famous, old dead guy to be a composer!  I reminded the students that they were going to participate in the very work of God--creating--even thought they were "only " composing one new section of the song.

So, why only one measure instead of a whole new song?  In the Genesis account of creation, even God created within parameters (the 6 days, one focus a day, etc.)  We have to begin somewhere!  In the Orff-Schulwerk methodology, the focus is on the elemental aspects of music.  These concepts are referred to as the building blocks of all music.  Elemental components are foundational patterns of rhythm and melody that are easy to produce and manipulate.  In the next few lessons, we will move from one measures to two measures, then to a full Question and Answer form.

Getting Geared up for Grandparents Day!

It's March Madness in the Music Room!  Around here, though, that means Grandparents Day, not basketball!  All the grade levels are working hard to get ready for our programs. Our theme this year is "Ocean Commotion."  We hope you can join us on Friday, March 24th at 9am and 10:30am for our performances.  Below are a couple of videos of the students preparing their pieces.

Quaver Music is a phenomenal music education curriculum that we use here at FPD.  We have videos of Quaver, the quirky music store owner and music laboratory mad genius.  We use SmartBoard enriched activities to learn songs, rhythms, solfege, recorder pieces, and on and on.  The student section of the website has been updated to include several games, music theory lessons, and even play at home recorder pieces.  Here is how to sign up for a free account! There is also an app for smartphone, iPod, or tablets called "QStudent." Students can download the free app and log on with their same computer log-in and access these materials a second way.

1) Go to www.quavermusic.com
2) Click on "Sign Up"
3) Create a username and password you can remember.  Put in the fpdmusic@gmail.com email address for sign-up (This is monitored by Mrs. Krejci) OR use a parent's email. Check gender box and the Agree box. 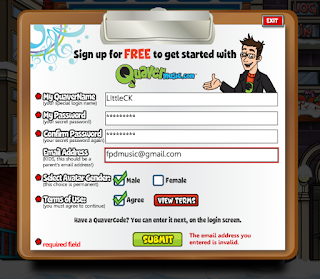 4) You'll be asked if you have a "Special Quaver Code."  You need to email Mrs. Krejci and ask for this code.  Put "Secret Code" in the Subject line. Write your name and your grade in the body of the message.  I'll send you back a 6 digit code to type in here.  This allows you access to more student games. 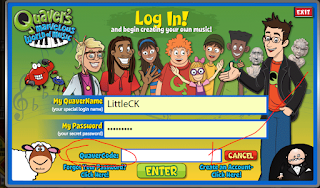 Mrs. Krejci ran into Quaver at a Music Teacher conference last week.  He has a special message for the kids at FPD!

The Elementary Christmas program, “Christmas in Central Park” is only a few weeks away! Performances are Thursday, December 10th at 1 and 7pm. All students in 1st – 5th grade will be involved. Also, check out the FPD Music Room blog at www.fpdmusic.com where all song lyrics are under the “Special Programs and Events” tab.

Costume Information:
All students 1st-5th grade: Students should wear blue jeans or black pants, a long-sleeve top in red, green, or white (small print is fine, but no logos, please), and a winter scarf (any color is fine.) They are going to be dressed as neighborhood kids at an outdoor Christmas party. Please wear this to school on Thursday, December 10th.